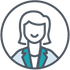 What are the Tax consequences for Cryptocurrency via rewards programs?

Some Cryptocurrency Projects have a reward program for participating in a network or specific use. This can be seen in Projects such as Lbry’s Credits or The Brave Browser’s “Brave ads” with their Brave Attention Token.

Last May I signed up for Lbry’s Creator Rewards program that was basically users Beta testing the software/network. It could be watch a video, follow X amount of people just to see how the network worked, then you’d received Lbry’s Credits (LBC) Which you could cash out or send to another user as a “Tip.” I only ever tipped users on the platform from the Crypto I’ve received as they would have more used of it than I would; I only wanted to see how the network worked for the time being and I did not want to get involved with exchanges at this point.

After reading over CRA’s Cryptocurrency Guide I have to wonder what these sorts of systems fall under, if any tax consequence at all?

Do these count as a barter transactions? If so what would need to do within Turbo Tax to file properly?

I kind of have a feeling that I need to upgrade since I have the Standard version of the software currently installed.

Thank you for your time, and I await any advice that could be offered.