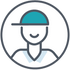 I got new job after be dismissed because of Covid-19. How do I fill up the TD1 and TD1BC forms?

Hello, I need suggestions on how to fill the form TD1 and TD1BC. I filled this two form in 2019 , but I got dismissed this past March because of Covid-19. How do I fill up this two forms?

I got new job after be dismissed because of Covid-19. How do I fill up the TD1 and TD1BC forms?

TD1 forms are used to calculate how much tax to deduct at the source (from your pay). There's not much to the forms unless you're working two jobs at once, or want more/less income tax deducted at the source.

The TD1 for example only needs your personal info (name, SIN, etc.) and a couple of figures.

The other figures are used to adjust how much income tax is deducted is you have a disability or other credits at tax time. If you stick with just the lines 1 & 13, you'll just claim these credit amounts on your tax return instead if you have them.

If you'd like to bank a bit of extra income tax (if you received the CERB for example), you might want to put in a figure in the Additional tax to be deducted space. If you're not good at setting money aside for taxes, it's a good option. Even an extra $10/week will give you a $300 cushion at tax time.